Another Year, where climate brought us extremely good and bad surprises. 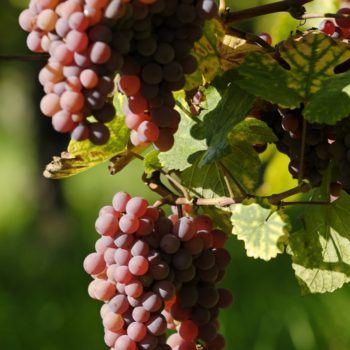 The winter 2013/2014 was mild and dry. Cold days were rare. March was again the driest month of the year with almost no rainfall. These conditions favored a very early sprouting by end of March and a rapid vine growth in spring. The temperatures in June and end of July were very hot. Blossoming began in the last days of May and was completed very early and quickly around June 10 in the whole estate. Extreme temperatures up to 37 ° C resulted in some losses.

Above average rainfalls in July, together with high temperatures created favorable conditions for the development of mildew diseases. In August, the temperatures were cooler and rainfall decreased. September was a good month with lots of sunshine and little rain. Our 2014 vintage had an early flowering but cooler weather in August slowed the grapes ripening.

By end of August, a new disease had spread in the vineyard: Drosophila Suzukii or Asian Bug. Favorable weather conditions helped the bug to spread throughout the vineyard and with no means to fight against, its impact was felt specially on our Pinot Noir, Pinot Gris and Gewurztraminer grapes where a lot of the parcels had to be sorted and checked manually at harvest time (September 15 to October 25).. The cooler month of August also gave us an unexpected and high level of acidity in the grapes at harvest.

The fermentations were very fast for all varietals except the Riesling. All the wines have a nice acid balance. A good year to discover without delay.

Discover all our wines

Receive our news and promotional offers (maximum once a month)